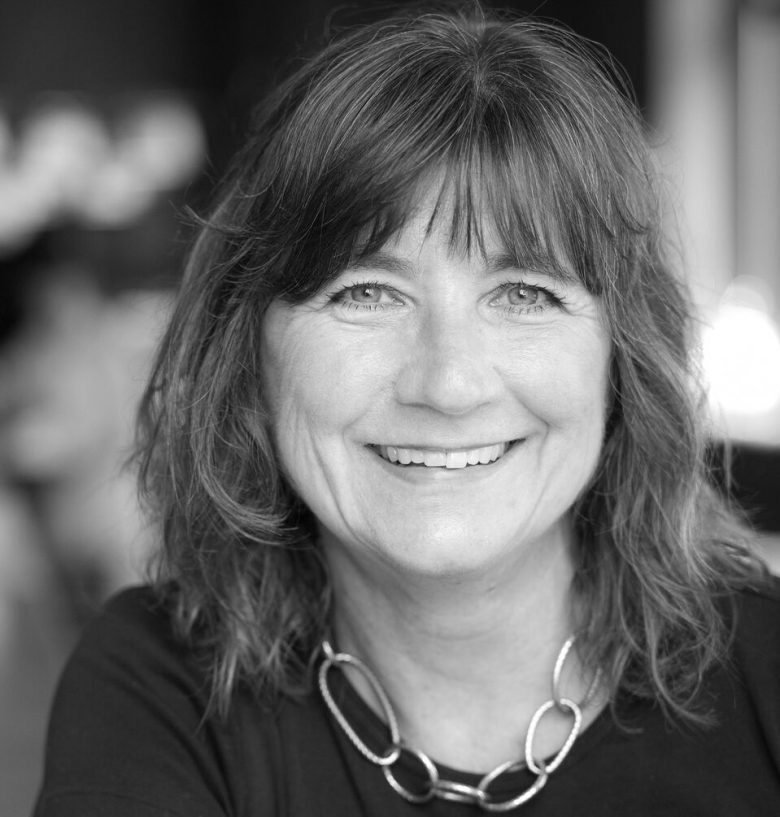 Andy Cunningham is the founder and president of Cunningham Collective, a marketing, brand and communication strategy firm dedicated to bringing innovation to market. She is also the author of Get to Aha!: Discover Your Positioning DNA and Dominate Your Competition (McGraw-Hill), and the host of the popular podcast Marketing Over Ice.

An entrepreneur at the forefront of marketing, branding, positioning and communicating “The Next Big Thing,” Andy has played a key role in the launch of a number of new technology categories and products over the past 35 years and worked along side Steve Jobs during launch of the original Macintosh.

Today she advises startups, serves on several corporate boards, is a Henry Crown Fellow and a trustee at the Aspen Institute. She is a graduate of Northwestern University and lives in Sausalito on an old wooden boat with her husband Rand Siegfried.

We had the opportunity to speak to Andy about her new book, what it was like working on the original Macintosh with Steve Jobs, and how today’s entrepreneurs can find their positioning DNA and dominate their competition.

Welcome to StartUp Mindset, Andy.  Tell us a little about your story and how you ended up in Silicon Valley. How did you end up working with Apple (Regis McKenna)?

I have always been fascinated with science and technology. I grew up in a suburb of Chicago and went to Northwestern University in Evanston, Illinois. I majored in English literature and was a part of the creative writing program there. Wanting desperately to write for a living, my first job out of college was writing back-of-the-book product pieces for Fleet Maintenance & Specifying and Heavy Duty Equipment Management Maintenance, two trade magazines published by the Irving-Cloud Publishing Company in Lincolnwood, Illinois. Not exactly the New York Times, but it was writing nonetheless. The problem was it didn’t pay a living wage and I had to have two jobs to support myself during those years. I finally decided I needed a better paying job so I ended up in PR at Burson-Marsteller in Chicago in 1981. One of my accounts was Bell + Howell, an educational technology company that was remarketing the Apple II as “The Black Apple.”

They took the beige cover off it, put on the Bell + Howell black metal case and gave it the Black Apple name. I was thrilled when my client gave me one and I proudly took it to our librarian at the agency. She and I played with it for hours each day, exploring what could be done with a “personal computer.” I was hooked. And everyone knew it. My boss kept putting articles about Silicon Valley on my desk and I salivated with each one. When Burson-Marsteller decided to open an office in Silicon Valley, I wanted to be part of it. I came out to interview with the head of the office, but was savvy enough at my young age to visit with the other agencies there as well during my trip.

I concluded my day of interviews with a one-on-one with Regis of Regis McKenna, Inc. He had just lost the Apple team due to the challenge of launching the Lisa the previous year and needed someone to work on Apple. I think he believed I could get along with Steve Jobs and he offered me a job on the spot. It was like a dream come true! I was going to launch this new computer called Macintosh in just 8 months.

What was Steve Jobs like back in those days and what was it like working with him?

Steve was a genius. He saw things other people didn’t see and envisioned the way people would work if they had tools that felt like appliances—beautifully designed and easy to use. He was changing the world and we all knew it. He was challenging and difficult; he wasn’t a nice person. But he was focused and pure in his agenda. If you were selected to be on his team, it was an honor and a privilege. He taught us how to make miracles happen and with his guidance we did. I wouldn’t trade that time for anything.

We heard that Michael Jackson’s song Billie Jean had a unique effect on Steve. Could you share a story about that since you were an eyewitness?

Fortune Magazine had come to the Carlyle Hotel in New York to do a photo shoot of Steve and Macintosh for the cover. We had rented a suite that was fully outfitted to the exact specs that Steve ordered—baby grand piano, comfortable couches, vases of calla lilies and bowls of strawberries accompanied with cream (in a separate bowl).

Steve had asked me to bring the Thriller tape (yes, tape!) because he liked Michael Jackson, but it wasn’t until the photographer started unpacking his equipment that Steve asked me to bring it out. He hated having his picture taken and usually snarled through most photo shoots. This was no different. The photographer began asking Steve to strike a pose here and there and he blatantly refused. Then Steve asked me to play the tape while all this arranging was going on.

Billie Jean happened to be a few songs on the tape, so I didn’t notice until we got there that for some reason, that particular music “soothed the savage beast.” He snarled and complained and frowned and grimaced through the first few songs but as soon as that iconic beat started, he calmed down, became docile and cooperated with the poor photographer. Until the song ended and with it his peaceful demeanor.

He returned to snarling and refusing. I hit rewind and got to the start of Billie Jean and again, he calmed down and cooperated. We continued this way throughout the photo shoot with me furiously rewinding while he snorted waiting for the first few bars to reach his ears and then calm down. It was really quite amazing.

Did you get the feeling that personal computers would become as big and as important to the world as they are now?

I had no doubt about it. Those weeks I spent playing with the Apple II in the Burson-Marsteller library showed me that we had only scratched the surface of what these machines could do. And they keep getting more powerful and smaller. Moore’s Law in action!

While working with Jobs on the Macintosh, what lessons did that teach you about brand strategy?

The greatest lesson of the early days of Macintosh was the age-old one of listening and watching what customers were doing—or not—with the product. We noticed two things. Macintosh wasn’t selling to businesses as we had thought it would. In fact, it was pretty much a failure in that sense. But we also noticed that creative people were attracted to it, in fact building relationships with their Macs and sneaking them into their companies through the back door and into the marketing department.

In your book “Get to Aha”, you write a lot about positioning DNA. Could you tell us a little more about that and why it’s so important? 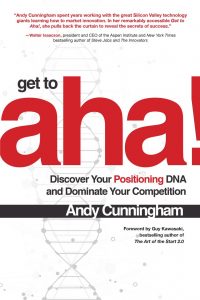 They are different from each other in the way they organize themselves; the way they measure success; the way they hire, train and compensate people; even what they talk about in meetings. So I thought that like people, they could accomplish more—be more successful in selling more stuff—if they aligned their marketing with their DNA. I realized that once a company knows what it’s made of, it can make something of it. This realization has helped hundreds of companies be more aligned in all their endeavors and market themselves more authentically.

You also mention in your book the importance of leaders and founders asking the right questions about their company BEFORE they express their identity. But many of our readers may have already launched their businesses without taking the time to do what you’ve suggested in your book. Is that a fatal error? What, if anything, can they do correct that error?

I believe that identifying your corporate DNA and beginning to align your initiatives with it can happen at any time. We can now sequence the human genome and as a result we know more about ourselves than ever before. We can make better decisions. We can align our activities, our lifestyle, our food choices with our DNA. We can be better humans, even if we begin tomorrow. The same with companies. As soon as they know their DNA they can begin aligning with it. The result will be a more authentic marketing strategy and better alignment of corporate functions.

The marketing of technology company products has changed over the years. What direction do you think it is going?

Marketing technology has always been first and foremost about educating the market about a new way of doing things or a new solution to a problem. That part won’t change. But what is changing is that most companies, regardless of their industry, use technology to do what they do so the need to educate their markets (and their employees) is increasing. And technologies are entering markets at lightning speed.

The need for marketing people to translate technology features into benefits and value is greater than ever before. And in today’s world, we have loads of analytics to tell us whether or not we’ve succeeded. I love that technology is woven into our daily lives, as consumers and businesses. And as a marketing person, I see nothing but opportunity ahead to continue to bring innovation to market.

What is the best piece of marketing advice you would give to a new or aspiring entrepreneur?

Develop your product and get it into the hands of customers. Then pay very close attention to what is sticky in their hands (and it may not be what you expect). When you identify it, amplify it. There’s nothing better suited to inform marketing initiatives than actual customer experience.

7 Reasons Why Entrepreneurs Should Travel More