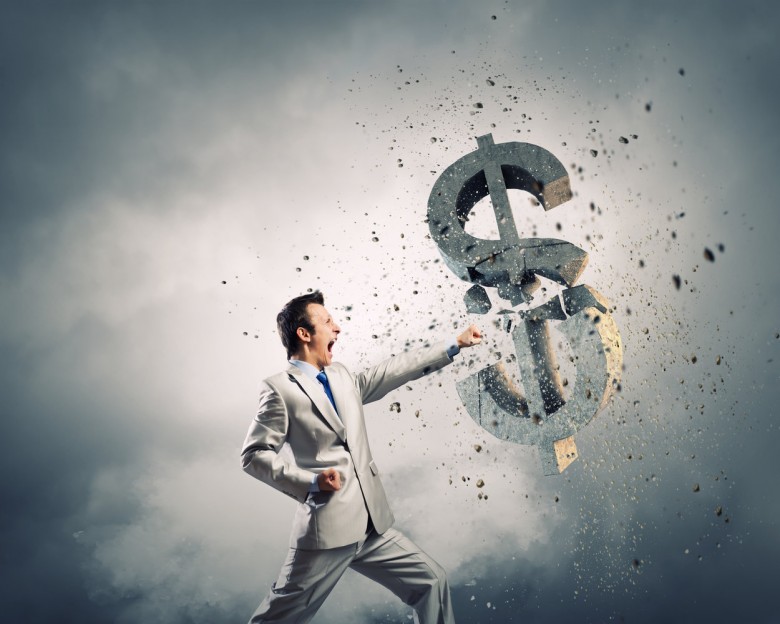 You have written a good business plan and you even have a list of all the people that you are going to hire to start your own company. Your childhood friend currently working on Wall Street already saw your business plan and not only he thinks that you have a cool idea that is going to change the world but he also wants to invest his own cash in your new company in exchange for a 10% stake.

Your stepfather wants to invest another 10% because your mother convinced him and your father already signed up for 10%. All your former girlfriends were also very interested in your idea because you were always the most likely to succeed male when you were in college and combined they now have another 10% of your company.

You called every boss and coworker that you ever had including all those odd summer jobs you had when you were just a kid and $100 here and $1,000 there and soon you have another 9% of the cash you need to start your own company.
All you really need to do is to make a lot of calls and send a lot of emails. At the end of the day, you will have 49% of your company gone and that is when you should stop if you don’t want to get fired from your own company eventually.

If you cannot even convince a coworker without a college degree that you used to work with when you were flipping burgers at McDonald’s a few months ago to lend you $1,000 to start your own company then how are you going to convince an executive of a publicly traded company to buy your products or services?

There are always options to raise money that you may not have thought about.  Check out list of fundbox reviews and you’ll see that you are not the only one that needed money to fund their business. But do you have the right idea?

Here are a few helpful suggestions if you want to raise $186,000 or less. Why $186,000? Because that is exactly what you need to become a member of the elite demographic group usually called the Top 5%.

Get an MBA on Your Team

Back in the 1984 before Ryanair (RYAAY) was invented it was very expensive for a recently graduated engineer, lawyer or architect born in Marrakesh or Budapest to fly all the way to Paris or London to get a job.
If you had a college degree then you were safe and you could get a good job for the rest of your life.

Now you are competing in the job market with people coming from Brazil, China, Russia and India and your college degree is not enough to get a job. If you are begging for money from millionaires then you really need to get an MBA on your team or you won’t get too many checks.

Student Loans Are Not For Entrepreneurs

If you are drowning in debt and you cannot even get your own personal finance in order then nobody is going to invest in your company.

One of the things venture capitalists check when you request a meeting with them is your credit score. If you don’t even have a platinum credit card in good standing then you are just wasting everybody’s time.
The government wants you to go to college only because you will get a job as soon as you graduate and make more money than a taxpayer with only a high school education.

I don’t need to explain to you that a nation of software developers is going to be wealthier than a nation of fishermen.
If you are still in college and you are thinking about starting your own company after you graduate then you need to work as hard as you can on the weekends and use your entire paycheck to reduce your student loan debt.
Make enough cash to erase your student loans before you try to raise money from investors.

As you can see, Uber is growing extremely quickly. Allow me to explain to you how Uber is doing this.
When a large company like Starbucks (SBUX) or McDonald’s (MCD) opens a new restaurant, they have exactly 0 customers the day they open. Sure, they can print a few coupons in the local newspapers and maybe send a few coupons to all the people that are not currently a local newspaper subscriber and maybe buy a few ads in the local radio and television stations to let the consumers know that they are open for business.

Assuming the girl in charge of the entire marketing campaign is doing her job, a lot of people will be buying coffee on the very first day that they are open for business. However, advertising only goes so far and you cannot really turn a profit since the very first day. That is impossible. This is simply because they need to invest millions in bricks and mortar and it usually takes years before they can recover their investment.

In fact, Chipotle Mexican Grill (CMG) only makes $300 million each year after selling $3.2 billion or about 9%
Global corporations are always searching for new customers.
Let’s imagine for a moment that you are an employee of a Forbes 2000 company and your job requires that you fly all over the country and you are using Uber to hire a driver that can pick you up at the airport and take you to your business meeting.

Uber knows where you live (City) and they know that you are a very busy businessman when you request a car in New York on a Monday and another one in Los Angeles on a Tuesday and another one in Chicago on a Wednesday.
On a Thursday you request a car in Las Cruces, New Mexico and guess what? There is no Uber there yet.
If enough people are requesting a car at that location then Travis Kalanick will get a message on his phone and he will quickly sent a team of lawyers, software developers and other types of employees to that location to begin selling Uber rides to everybody as soon as possible.

There is only one measure of success that matters at Uber: Number of rides that were requested but they could not charge because they did not have any drivers in that area at the time.
The two cities with the highest number of requests are the ones they usually choose for their expansion plans that day. It is highly likely that the number of cities will increase to at least three per day in the near future now that they have raised $1.2 billion from foreign investors.

Uber posts a notice on its blog and within seconds hundreds of unemployed people with cars become drivers for the company.  The demand for Uber rides far exceeds supply everywhere and even if you acquire 1000 used luxury cars and drive all of them exclusively in New York City which is currently the eight largest urban area where Uber operates then you won’t satisfy the growing demand.

A lot of white collar workers are realizing that you can finish that Microsoft PowerPoint presentation when you are in the backseat of an Uber car and charge to your client $20 per hour or whatever you usually charge for your time and only pay $10 per hour or less to your Uber driver. The old way (You behind the wheel) gets you $0 per hour and the new way (You in the backseat) gets you $10 or more per hour.

You buy the used luxury car, six unemployed drivers drive it around the clock and everybody makes money including Uber’s shareholders and Uncle Sam. It’s not exactly rocket science. Start with one used luxury car right now in your city and keep going until you have at least 10 luxury cars and you are making at least $450,000

If you have a luxury car and you live in a city without Uber and you are currently unemployed then drop me a line and I will fly one of my drivers all the way to wherever you are and she will drive your car all the way down to Monterrey where we will be picking people at the Monterrey International Airport all day long. I will take care of all the paperwork for you.

Over 6,000,000 people from all over the world fly to this extremely important city each year and guess what? They all have phones with the Uber app installed.   If the used car business it’s good enough for Warren Buffett then it’s also good enough for you.


How to Tackle Your Big Goals