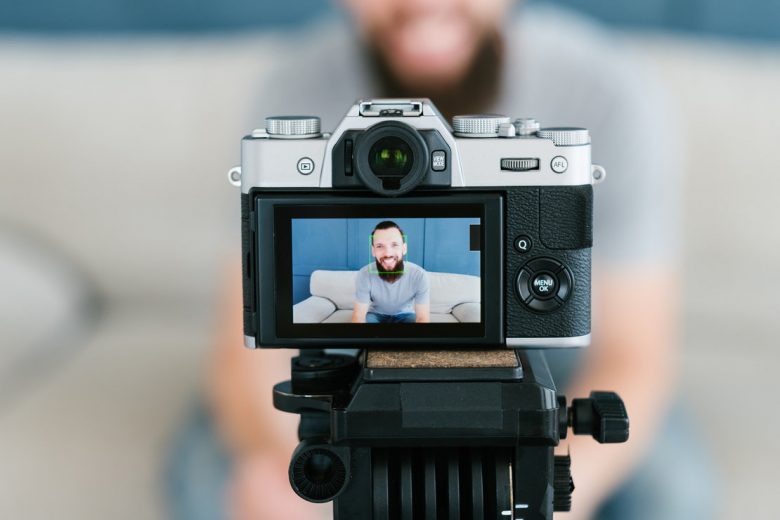 This is an extraordinary camera that takes beautiful photos even in low light. Vloggers can take 20-megapixel photos and 4K UHD videos at 30fps with this camera. It is quite small in size and thus, is easy to carry around. It comes with a NIKKOR glass lens that has an optical zoom capacity of 35X and a dynamic zoom capacity of 70X.

The camera also features a special creative mode using which vloggers can create beautiful photos and videos within the camera. The Nikon COOLPIX A900 comes with built-in NFC, Wifi, and Bluetooth Low Energy (BLE) capabilities. That means all the photos and videos you take using this camera automatically get transferred to the connected smartphone or tablet. The Nikon COOLPIX A900 [4k] is a brilliant choice for aspiring vloggers.

The Canon Powershot ELPH 180 is a 20-megapixel camera that features Canon’s CCD sensor. It comes with an 8x optical zoom lens with an aperture range of f/3.2 to f/6.9. The camera uses the NB-11L/MB-11LH battery, which offers it a battery life of 220 shots. If you want to save battery, use the Eco mode. Similarly, if you want the camera to optimize for best settings for different objects, select the SMART Auto mode.

Unfortunately, the Canon Powershot ELPH 180 does not support image stabilization. Similarly, it does not also support any form of wireless connectivity. However, at just 4.4 ounces, this camera is quite small and easy to carry around. It is also very light on the pocket. All of this makes this camera a fantastic beginner’s camera for those just starting in the vlogging world.

This is a mirrorless camera with the ability to capture 4K videos. In many markets, Panasonic sells it under the names G80, G81, and G8. Some of its laudable features are a magnesium alloy front plate, an electromagnetic shutter, a 5-axis in-camera IS, and an electronic viewfinder. The camera uses a 16MP chip with AA filters. The Panasonic Lumix G85 is also weather-sealed, a feature that adds to its overall life. All in all, this is probably the best camera amongst its peers by Panasonic.

If you are looking for a mirrorless camera that won’t burn a hole in your pocket, consider the Fujifilm X-A5. Fujifilm has been a pioneer in the area of mirrorless cameras and has some beautiful mirrorless cameras to offer. This camera by Fujifilm features a 24MP APS-C CMOS sensor and Fujifilm’s X-mount lenses. It also supports Phase Detect autofocus, thereby allowing for better subject tracking. The Fujifilm X-A5 can record up to 5 minutes of 4K video and comes with in-built wifi and Bluetooth. Fujifilm X-A5 is an excellent choice for beginners in the field of video marketing.

The Sony cyber-shot range has been in the market for a while now and has managed to create an enormous fan following in this time. This camera is the perfect choice for those who do not want to carry a bulky DSLR or CRC all the time. The camera has a pixel count of 20.1 million and features Sony’s latest Exmor RS design sensor. Sony Cyber-shot RX 100 IV also features the Bionz processor designed for super-high speeds and has improved autofocus speed.

The sensor has a DRAM chip attached to it. This camera supports video shooting at 16fps and slow-motion video recording up to 1000fps and 1080/30p video recordings. It comes with in-built NFC and Bluetooth. This is a beautiful camera but is slightly on the pricier side as compared to its rivals.

This is the perfect camera/gadget for maestros of the vlogging world. The Osmo Pocket is only 4.8-inches tall and four ounces in weight, which makes it an ideal camera for those who want to record videos while indulging in various activities. It features a 1 and 2/3-inch sensor. This is a powerful camera capable of capturing 12MP images and 4k videos in fantastic quality. You can attach it to a smartphone if you want access to DJI’s memo app. However, one of the most significant weaknesses of this drone-style camera is its battery. The battery doesn’t last long, especially if you start taking 4k videos.

The new Canon Powershot G7 X Mark ii features a one-inch type sensor which enables excellent image quality even in low light. It features a CMOS sensor with a 4x optical zoom lens with an aperture range of f/1.8-f/2.8. The camera uses the latest DIGIC 7 processor and supports HD video recording. One of the highlights of this camera is the touch-screen tilts feature. This feature allows users to shoot at any angle they want.

The Canon EOS M6 is a mirrorless camera that uses the latest 24.2 megapixel APS-C CMOS sensor. It efficiently uses the Dual Pixel CMOS AF autofocus technology while taking both images as well as videos. This camera’s autofocus system supports 1-point autofocus modes as well as smooth zone AF. The touchscreen is a nice addition and works well.

Canon EOS comes equipped with the latest DIGIC 7 image processor and has a battery life of 295 shots. The Canon EOS M6 is a beautiful camera with its only drawback being that it does not support 4K ultra-high-definition recording. It is capable of recording only full HD videos.

This, without a doubt, is one of the best cameras available for those in the vlogging world. It’s packed with amazing features. The camera uses a 12MP sensor and can record 4k videos at 60fps. Two critical features make it worth every penny. The first feature is Hypersmooth. The hypersmooth feature allows stabilization even while capturing 60fps videos at full resolution. The second feature is called TimeWrap. This feature enables users to capture stabilized hyperlapses. The camera also supports voice control, making it easier to use. With this camera, GoPro has proved once again why it is considered to be a pioneer in the field.

If you have been in the vlogging world for a while and are already familiar with a basic camera, it’s time to move on to Sony RX100 Mark V. Users can shoot 4K Ultra HD videos at 25fps with this camera. Some of its highlights include an ‘anti-distortion’ shutter, face-detection autofocus, ability to record videos in two- and four-second bursts, and a pixel count of 20.1 million. The fast lens of the camera features phase-detect autofocus and can record videos up to 960fps. This camera is one of the best offerings by Sony.

There are links on this site that can be defined as “affiliate links”. This means that we may receive a small commission (at no cost to you) if you subscribe or purchase something through the links.  You can read our full affiliate disclosure here:


4 Ways of Dealing With Rejection in Business