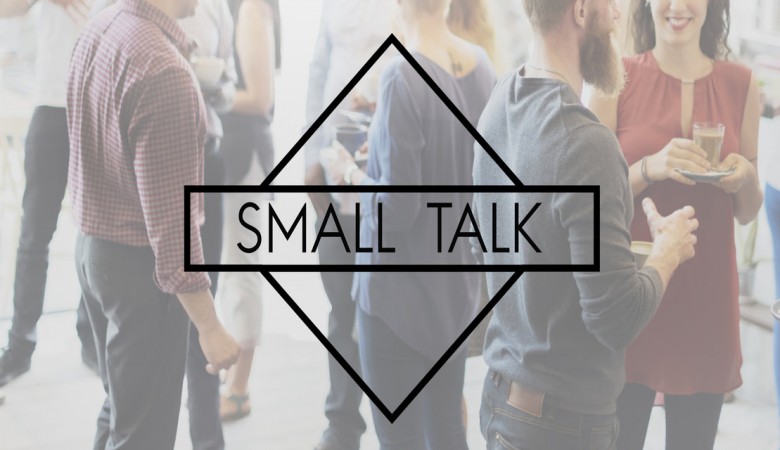 I took the liberty of looking up the actual definition of “small talk,” just to get a better idea of how something so habitual to our lives has garnered such a bad reputation. It turns out, it’s had one for quite some time, and with dissociation happening thanks to the excessive use of technology, to avoid situations we don’t feel comfortable with, this bad mouthing might just be about to get worse.

An array of synonyms of “useless” appeared instantaneously, and I have to admit for a second I felt useless in this cause myself. Chit-chat, according to popular vote, is “unnecessary,” a “waste of time,” only benefits “nosy people” and attention-seeking “extroverts,” and apparently (this one is my favorite) it’s why “people have become dumb, conformed, and useless.”

Ah, Watson, it was small talk after all! How could we have let it slip right under our noses…

As much as I would love for small talk to be the culprit (it certainly would make finding the cure for stupidity much easier), I don’t believe we can wave our flags of victory just yet. When the bulk of people feel such utter disdain towards something, there’s usually a somewhat valid reason. I mean, look at our current global political situation, and you get what I’m saying. In this case though, and I truly hate to be the bearer of bad news, it’s not the message that’s at fault….. it’s the messenger. And yes, I am still talking about irrelevant banter.

The problem is that we’ve learned to dismiss everything related to small talk as petty and lacking conversational nutrition. It’s not the conversation itself that makes it toxic, but how we’ve learned to see and practice it. We’ve been told time and again that what you say and how you say it, are two different things. In this case, the later might just be more important. There are an infinite number of articles telling you how to avoid situations where you might be forced to use “idle talk,” for introverts especially, who might find themselves uncomfortable in these situations. What no one tells you is how to practice using small talk in a way that benefits both yourself and the other person engaging in it, and why it is both socially and culturally relevant and important around the world.

The World of Small Talk

There are plenty of misconceptions as to when and where in the world small talk is used. Although the formalities and intricacies of small talk vary depending on where you are, the U.S. is definitely not the only babbling nation. In Argentina, for instance, and many Latin-American countries, asking your neighbors how they are doing, commenting about the last soccer (football for us) match, or sticking up a conversation about the traffic and the unbearable summer heat with the man who is selling you cigarettes is a cultural pattern. According to the folks at Transparent Language, a language learning service, “In China, however, [they] thoroughly enjoy exchanging pleasantries. In the business world, first meetings among Chinese associates are rarely productive, and are considered more of an opportunity to meet one another and get comfortable.”

Due to the fact that Latin-Americans are quite the conversationalists, and also because I grew up watching my parents weave conversations like they were masterpieces at dinner parties and long barbecues, what we call small talk has always appeared to me like an art worth learning. Small talk is often an introduction to the other person’s ability to communicate well. It’s not necessarily through the words that they speak that we capture these things, but rather how we notice the other person in the conversation unfolds, the interest that they show about things, and the way they try to interact or not.

Chit chat about seemingly unimportant trivialities gives us a lot of insight into who the person were talking to is. “Not because it’s a snobby shorthand for sorting a person by her pedigree, but because it lets you evaluate how she talks about her experiences, how she tells the story of herself, and how she approaches trifles like bad weather. Is she whiny? Wry? Cheery? It’s all informative, and none of it requires badgering anyone to reveal the moment of their most soul-shattering humiliation over cocktails,” says Slate contributor Ruth Graham in her article “In Defense of Small Talk.”

Small talk has a reputation for being what we use when we don’t mean what we say. We are conditioned to have automated responses to small talk questions. Yes, there are instances when we are lucky to fall into a deep conversation, with strangers or acquaintances, that can contribute plenty of positive and meaningful ideas to our lives. These moments are special, and shouldn’t be easily dismissed. Still, most people don’t want to sit in front of one another and share their deepest darkest secrets, or delve in to the meaning of life, so small talk is necessary to take the first steps towards building some sort of connection, or discarding any possibility of it. Let’s not forget that oftentimes the simplest things in life hold the most meaning.

What you say might not be that important to the other person, but how you carry out a conversation can determine if it will continue, and develop into something else (an opportunity maybe), or not. It’s a talent worth developing, and the only way to be good at it is if you are as invested in listening as you are in speaking. If you reduce small talk to the concept, it’s quite bare, except if you take what it is and perceive everything that a conversation might encompass.

This includes body language, facial expressions, and the setting in which you are having that conversation. This is why it is important. Small talk, done properly, drags us back into the present we are so often trying to escape nowadays. Think about a room full of people today. Now think of how many people you would find hiding behind their smartphones. A lot, right? Big ideas and opportunities happen when we pay attention to the world and people around us, and they often come hidden within small containers.

This is why developing into a good conversationalist is even more important today. People don’t rely on small talk anymore because they no longer have to. They hide behind their screens or put their headphones on. A wall, a barrier is created, and suddenly we don’t know how to have a simple conversation with others anymore. If you do, nowadays, you stand out. I always compare this to the way that a writer expresses his or her ideas often says more about the quality of their trade than the content. You can learn a lot about a writer by looking at the way in which they spin their tales; and so similarly, you can tell a lot about someone by observing the way they treat even the most insignificant encounters.

Chatting, talking, having a word … Creating links from conversation in public places is a tradition that runs the risk of getting lost. I understand the concern that we are constantly speaking and not actually saying much, but the key is in the intention and the purpose with which we chat. Look at the other person, smile, be attentive to the words, and respond with sincerity. Then it no longer feels like and it no longer is useless banter.

How Your E-Commerce Business Can Thrive On Amazon


How to Build Trust in Your Company and Your Brand