Learning from the Past: What the Ghosts of these 4 Companies Have Taught us About Entrepreneurship 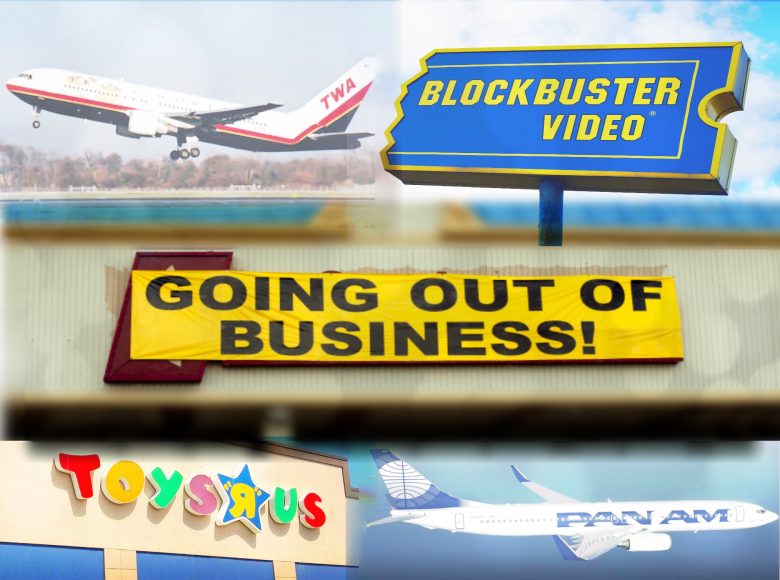 I have often defined my own life in the form of chapters. Like a book whose chapters represent the next phase or setting, our own lives can also be measured in similar ways. For businesses, the same could be said about their stories as well. From the rise of their early successes, to the peak of their reign, to the accumulation of where they are now, many famous businesses tales are marked with unique chapters that reveal their ups and downs as a company.

Unfortunately, not every American business ends up with a happily ever after. Some of the most prevalent and inspiring companies end up filing for the dreaded Chapter Seven bankruptcy that ultimately leads to the unfortunate end and total liquidation of assets for a business. This is the path that many do not want as an ending to their story, especially when it comes to a company that people have poured their heart and soul into.

However, for many well-known and beloved businesses that we have seen in the 20th and 21st century, this has been the unfortunate end to their remarkable stories. While their ultimate ending may not have been what they planned, that doesn’t take away from the lessons they taught us about business and entrepreneurship. It was their visions and dreams that have helped shape many of the businesses that we know today, and it was their ideas that still live on in many ways.

Here are the top four companies who are no longer around, but whose pasts have taught us so much about business leadership today.

The tale of two airlines

There was a time when air travel was a luxury experience. Flying was part of the vacation for those who were traveling and not just a mode of transportation that gets us from one place to the next. In a post 9/11 world, it is hard to imagine how going to the airport isn’t just taxing, but also a lot more work than it used to be.

Two of the most well-known and revered airlines peaked during this era where flying was part of the fun of traveling. The now defunct Trans World Airlines (known as TWA) and PanAm were those two companies.

Both were pioneers of the airline world, and were loved among not only those who worked for the company but also those who flew them. Both TWA and Pan American World Airways (known as PanAm) were well-renowned for flying transcontinentally between the United States and other countries. Their advantageous dreams of flying the world in giant jumbo jets not only put them both on the map as companies, but also revolutionized air travel as we know it (this included inflight movies).

However, their greatest strength turned into their greatest weakness in the following decades. Due to the oil crisis of the 1970’s, the price of oil more than doubled. Since both PanAm and TWA choose to invest in huge jumbo jets for flying transcontinental and domestic routes, the price to fuel their fleet just about broke each of them. With lower numbers of travelers to fill their seats to cover the costs, both airlines had to sell some of their fleet and routes to help make up the costs due to this crisis.

In the years after, both companies faced trivial issues such as company privatization, leadership shifts, and failure to grow domestic routes that helped etch their fate. However, it wasn’t until both PanAm and TWA lost airliners in tragic accidents that killed all passengers and crew on board that they suffered the final blow to each of their futures.

TWA flew its last flight in December 2001 after they sold the rest of their assets to American Airlines. PanAm ceased operations on December 4th, 1991 after sixty years of business operations.

While both companies are no longer around, their legacies are still deeply embedded in our traveling world. TWA was the airline that invented and created the first airline hub that many airlines still utilize to this day, while PanAm’s dedication to world-class service helped shape the flying experience as we know it. Each airline had deeply loyal employees who called their coworkers family and would speak of their time with fondness and gratitude. While the companies didn’t last in the business world, they truly lived on in spirit with those they employed and in the heart of airway transportation.

A name that most 1980’s and 90’s children would know, Blockbuster LLC (or commonly known as Blockbuster) was a household name and beloved service throughout the 1990’s and late 80’s. Developed and owned by David Cook, Blockbuster video opened its first store in 1985 when Cook realized the untapped market for video rentals.

Two years later, the company won a court case against Nintendo for the right to rent video games out to customers, which helped grow its fanbase. Over the course of the next decade, Blockbuster video brought millions of consumers the ability to watch their favorite movie from the comfort of their home for a small and reasonable fee.

Blockbuster hit the height of its career in 2004, when it employed over 84,000 people and had over 9,000 stores across the world. However, this movie jargonaut could only hold power for so long. Competition such as Redbox kiosks and the rising Netflix were beginning to surface on Blockbuster’s reign.

In 2000, Blockbuster had the chance to purchase Netflix for $50 million, but turned it down. This action would prove fatal for the powerhouse. After its peak in 2004, Netflix soon became its competition and Blockbuster was left to compete with Netflix’s growing popularity.

As the years progressed, Blockbuster did what it could to keep up with the on-demand competition, but its efforts were proving futile. By the end of the decade, Blockbuster failed to capitalize on the digital market, and with its higher rental and late fees, eventually closed all corporate stores by 2014.

In many ways, Blockbuster has taught some of us how not to run a business regarding future acquisitions. By not keeping up with the growing popularity of on-demand videos and not straying far from their aging business model, Blockbuster was left in the dust to keep up with more popular movie streaming avenues. Failing to see the change of times was what made Blockbuster a name of the past and not one we still hear about today.

Regardless of its dismal end, Blockbuster brought us the first family-friendly video store by not offering adult video options and focused on the love of movie watching for all ages. Blockbuster made us want to stay in Friday nights to enjoy a good movie with those we love. At one time, they envisioned the future for movie watching and gave us the chance to enjoy entertainment in the comforts of our home.

For that alone, I will always be grateful for having one in my hometown.

In a most recent tragic turn of events, the once thriving company, Toys R’ Us, is now a memory of the past in the retail world. It was first founded by Charles Lazarus in 1948 as a children’s furniture store in the United States. As time went on, and the dawn of the baby boomer generation was transpiring, Lazarus saw the need and excitement for children’s toys. In the 1950’s, Lazarus shifted his focus solely to selling toys, and the brand “Toys R’ Us” officially took off.

Throughout the next few decades, Toys R’ Us was a staple in the retail world. Kids loved the plethora of options that were displayed on the shelves of these stores. Toys R’ Us grew their brand by adding Babies R’ Us stores to their fleet that focused on baby-related items. By the 2011, many stores combined the two concepts into one store, hosting items for both children and babies.

However, all good things must come to an end. With the rise of online retailers who started to compete with the endless options of toys, as well as having a weak online presence, Toys R’ Us started to lose its grasp on its targeted audience. While they were a staple of the children’s world when it came to getting the latest toys, with competition from the online world and its 24/7 access, waiting for the doors to open to an actual store seemed like a thing of the past to the upcoming generations.

Finally, in June 2018, both Toys R’ Us and Babies R’ Us liquidated all stores, and the iconic chain is now a memory of the retail past. While there are currently plans to revamp the brand, it won’t be the same as the Toys R’ Us many of us knew and loved in our youth.

Kids of today will never know the excitement and joy it brought to walk into a Toys R’ Us. To see the shelves stocked with endless toys that one could only dream of is no longer possible. Toys R’ Us was the first of its kind to focus on one set targeted audience and be the best within that market segment. If we have learned anything from Toys R’ Us, it’s to not take for granted the excitement of buying from a brick and mortar store that houses everything you could ever want or need under one roof.

Regardless of the turn of the events that brought about the end of each company, it doesn’t take away from the legacies they each left behind. Like many things in life, there is a good and bad that can be learned by future business leaders in studying these defunct companies. One thing can be said for certain and that is each one these businesses were a product of their time, and a testament to the needs and wants of the generations that embraced them.