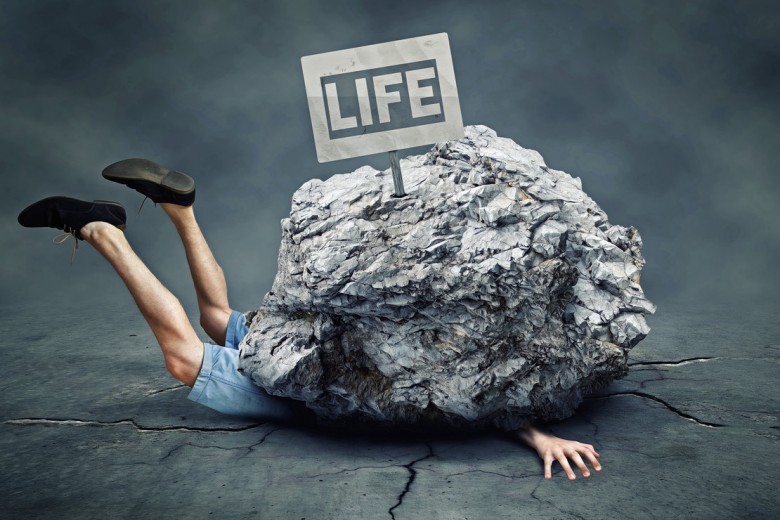 In life, things don’t always go the way you want them to. You take a chance, work incredibly hard with the belief that you will achieve something big. Then, the unthinkable happens, a major setback. Maybe a failure on your end or someone else’s but the result is the same.

Your goal or dream hasn’t been realized and you’re not sure if it ever will be. Major setbacks can wound your self-confidence, making it more difficult to pick yourself up and keep going. You may feel ashamed, humiliated and think you’re a complete failure. Anyone on the outside will tell you that’s absurd of course.Some major setbacks that come to mind from recent history include Steve Jobs introduction of the Mac or Richard Branson’s cola failure. Millions were lost in these situations but it didn’t stop them from being ridiculously successful in other projects.

New ideas were created or old ideas that didn’t work were re-created differently. My point is you also have a choice here. You can continue to spend time wallowing in what you believe is a failure or see things for what they are and keep trying. These seven methods will help you persevere even when there’s been a setback so large you don’t believe you can go on.

Look Back at Past Setbacks

Sometimes, it just takes a little perspective to make you see that setbacks are a part of life. There must have been a time in your past where things didn’t go quite right. Even if it took you a long period of time to get over it, you did right? You probably even excelled in some way because of it. If you look at the past, you’ll see that your life has been a series of setbacks. Some, you may have walked away from without regret while others you conquered.

Look at the setback objectively

If you can objectively look at the major setback, you’ll feel better about it. The good news is, it’s not the end of the world. You’re still here which means there’s still an opportunity. As you consider what went wrong, you may even come to understand how you could have done something differently.

Maybe you didn’t try hard enough at the time or underestimated the scale of it. If the setback came from no fault of your own, don’t see yourself as having bad luck. Don’t allow the mind to play tricks on you. Just figure out the weak point where things fell apart and make a change based on your findings.

Take it all in stride

Life happens. Setbacks are the risk of having a desire in this world and going for it. Many people don’t even take risks, shutting themselves out from endless possibilities. You are in the circle of people who try which makes you a different kind of character altogether.

You are strong for even taking the risk so when it doesn’t work out, take it in stride. Don’t stress out too much or see it as a complete disaster. Start rebuilding the next day like Thomas Edison. At age 67, his whole factory burnt down and when asked what he was going to do, his response was, “I’ll start all over again tomorrow.”

If you’re having a problem coming to terms with the setback, you may want to talk to someone that knows you well. They may just have some kind words to give you or have another perspective that you haven’t thought of. Sometimes we tend to beat ourselves up or have little understanding about ourselves. Someone that knows you well may be a good reminder of who you are and of some past situations that were similar for you.

This can remind you of what you’ve overcome and what was gained from a setback in the past. They may also share their own story of a letdown or setback. You will quickly realize that you’re not alone and that part of being a human that strives for something includes setbacks.

Take the next step

So you know what doesn’t work now. This is where you try something new to achieve what you want. In a way, one might even congratulate you as you are one step closer to your goal when you’ve experienced a setback. The most incredible successes didn’t happen on the first try.

If it was easy, everyone would be doing it. So take the next step towards what you want instead of staying in one spot and feeling diss appointed. Consider that you’re edging closer towards your end result as opposed to getting what you want on the first try.

Be nice to yourself

If you did something wrong that caused the major setback, don’t beat yourself up over it. This is counterproductive and won’t get you where you want to be. Don’t wallow in self-pity or deem yourself as a failure. You probably feel pretty down about the setback but a pity party will likely result in quitting. Being kind to yourself will do far more good while you figure out what to do next. See yourself as a success and a strong person who took a chance. Then, keeping taking chances and look beyond.

Look beyond the setback

There’s still hope for you to achieve or receive what you want. With all the above points, you have hopefully become inspired by a new idea that will allow you to succeed past the setback. Some people visualize their greatness and how it would feel to succeed. Stay hungry for what you want and keep trying. The setback can swallow you whole or it can propel you to new possibilities or ideas that will work. Brainstorm, do nice things for yourself, stay positive and believe in your success.

Also, allow yourself some flexibility. If your goal is very specific, you may be missing out on other possibilities. In Germany, weisswurst was created as the result of a butcher misreading a traditional recipe. It’s now one of the most popular breakfast sausages in the country. Keep on persevering towards your end result. You never know what could be around the next corner past your major setback.